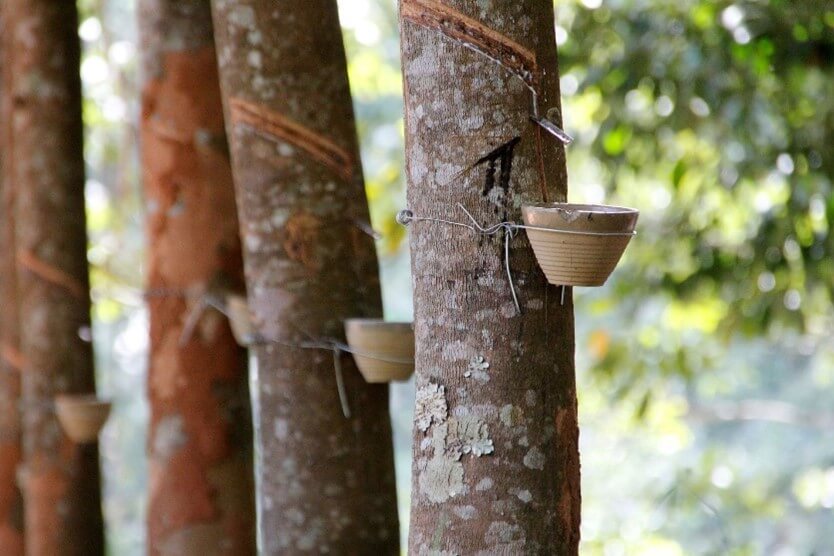 Latex is a natural resource that can be botanically sourced from trees. As natural rubber was developed and processes were invented throughout the 1800s and early 1900s, rubber became an increasingly valuable material.

During the second world war, rubber became a vital material used in gas masks and military vehicles for example. However, during this time it became increasingly difficult and expensive to transport rubber from Asia. The scarcity of rubber led to many countries trying to develop manmade materials which could be used in place of rubber. The first successful artificial rubbers, Buna S (Styrene Butadiene Rubber, commonly referred to as SBR) and Buna N (Nitrile Rubber) were developed in Germany in 1930. By 1941 Germany was producing 70,000 tonnes of synthetic rubber a year.

To create synthetic rubbers, scientists aimed to recreate the hydrocarbon polymers found in natural rubber latex. Michael Faraday, the pre-eminent English Scientist studied natural rubber in the 1800’s and found its chemical formula to be C5H8 along with 2-4% protein and 1-4% acetone-soluble materials. As natural latex contains only hydrogen and carbon atoms, these polymers can be created using petroleum hydrocarbons as the basic raw material. Synthetic rubber is mainly made using Naphtha, which is a by-product of refining oil and coal. For example, SBR which is a widely used synthetic rubber, can be produced by extracting styrene and butadiene from petroleum. These petroleum by-products can then be combined to form synthetic latex, which is then coagulated by acids and dried, similar to the process for natural latex. In this way, scientists are not only able to reproduce rubbers which are found in nature but to create completely new materials